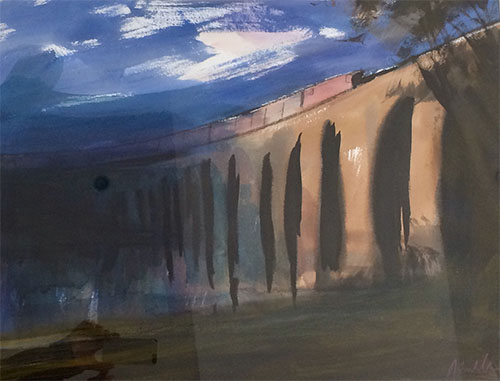 ‘‘The places I paint have been visited many times in mind. I am drawn to certain abstract forms, themes and compositions. I feel the invisible patterns made by our presence,the trails and shapes we leave,as part of some relationship with a place, and the interaction of those patterns with other shapes and the sky.’’

John Fieldhouse has been painting in the Borders area for the past twenty five  years with a brief sojourn to try out life in Southern Spain. This lapse was short lived and a return to the landscape in which he feels most at home has resulted in a series of very successful shows.

His next one man show will take place in September 2019 at The School House Gallery, Alnmouth, Northumberland.

John’s work can be viewed in a private gallery which is housed next to his studio at Smithy cottage, Fenham le Moor, or on his website as below:

Anyone wishing to visit would be advised to phone ahead or email.